Introduction The 300 Spartans is a 1962 CinemaScope epic film depicting the Battle of Thermopylae. Made with the cooperation of the Greek government, it was shot in the village of Perachora in the Peloponnese. The working title was Lion of Sparta. It stars Richard Egan as the Spartan king Leonidas, Sir Ralph Richardson as Themistocles… Read More

Introduction The Marksman is a 2005 American action film directed by Marcus Adams, starring Wesley Snipes, William Hope, Emma Samms and Anthony Warren. The film was released on direct-to-DVD in the US on 06 September 2005. Outline When the US is tricked into targeting an ‘armed’ nuclear reactor captured by Chechen rebels, a Chechen leader… Read More

Introduction Field of Fire is a 1991 action film directed by Cirio H. Santiago. Also known as Battle Gear. Outline Sergeant Thomas Duncan takes his men behind enemy lines to recover a secret government fighter copter and its pilot, a secret weapon all his own. But once stationed in the dense jungle brush of Vietnam,… Read More

Introduction Nam’s Angels, released as The Losers, is a 1970 American action film shot in the Philippines. The film was directed by Jack Starrett. Outline The plot involves a gang of Hells Angels-type bikers called “The Devil’s Advocates” involved in the Vietnam War. They are sent to the Cambodian jungle on Yamaha bikes in order… Read More 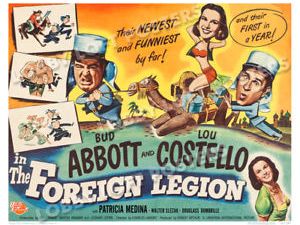 Introduction Abbott and Costello in the Foreign Legion is a 1950 comedy film directed by Charles Lamont and starring the comedy team of Abbott and Costello. Outline Bud Jones (Bud Abbott) and Lou Hotchkiss (Lou Costello) are wrestling promoters. Their star, Abdullah (Wee Willie Davis), no longer wishes to follow the script for their crooked… Read More

Introduction In the Navy is a 1941 film starring the comedy team of Abbott and Costello. It was the second service comedy based on the peacetime draft of 1940. The comedy team appeared in two other service comedies in 1941, before the United States entered the war: Buck Privates released in January and Keep ‘Em… Read More

Introduction Four rebellious teenagers in 1st century Roman-occupied Wales must flee their village and live in the wild after they accidentally kill a Roman soldier and cause an uprising. Outline After killing a soldier in Roman occupied Britain and causing an uprising, four rebellious teenagers must go on the run if they want to survive.… Read More

Introduction The Emperor of Paris is a 2018 French crime film directed by Jean-François Richet and written by Éric Besnard and Richet. Outline The film is about an ex-con turned police officer. Under the reign of Napoleon, Francois Vidocq cuts a notorious figure in the Parisian underworld-he is the only man to have escaped the… Read More

Introduction Brothers in Blood is a 1987 film directed by Tonino Valerii. Outline War is Hell… especially NAM. A group of battle weary soldiers in Vietnam are trapped behind enemy lines. There is no way back. No help on the way. It is only a matter of time and these guys intend to “Die Fighting”… Read More