Introduction Something of Value is a 1957 drama film directed by Richard Brooks and starring Rock Hudson, Dana Wynter, and Sidney Poitier. The film was reissued under the title Africa Ablaze. The film, based on the book of the same name by Robert Ruark, portrays the Mau Mau uprising (1952-1960) in Kenya. It shows the… Read More

Introduction Battle Hymn is a 1957 American war film directed by Douglas Sirk and starring Rock Hudson as Colonel Dean E. Hess, a real-life United States Air Force fighter pilot in the Korean War who helped evacuate several hundred war orphans to safety. Outline In the summer of 1950, one month after the invasion of… Read More

Introduction Invasion is a 1965 low-budget British science fiction film, directed by Alan Bridges for producer Jack Greenwood of Merton Park Studios. Outline An alien “Lystrian” spacecraft crash-lands on Earth, near a secluded hospital not far from London. The aliens, who are humanoid and resemble East Asians, are taken to a rural hospital after a… Read More

Introduction Army of the Dead is an upcoming American zombie heist film directed by Zack Snyder, from a script he wrote with Shay Hatten and Joby Harold, based on a story by Snyder. Outline Following a zombie outbreak in Las Vegas, a group of mercenaries take the ultimate gamble, venturing into the quarantine zone to… Read More

Introduction Without Remorse, or Tom Clancy’s Without Remorse, is an upcoming American action thriller film directed by Stefano Sollima and written by Taylor Sheridan and Will Staples. It is based on the 1993 novel of the same name by Tom Clancy and a spin-off of the Jack Ryan film series. Originally produced and set for… Read More

Introduction The Vault is a 2021 heist film. The film was titled Way Down in Spain and other European, South American and Asian countries. Outline Thom, a genius engineering graduate is interested in the Bank of Spain’s safe. The Bank building is more than 100 years old, with no building blueprints available and a security… Read More

Introduction Cherry is a 2021 American crime drama film directed by Anthony and Joe Russo, from a screenplay by Angela Russo-Otstot and Jessica Goldberg, based on the autofictional novel of the same name by Nico Walker. The film stars Tom Holland, Ciara Bravo, Jack Reynor, Michael Rispoli and Jeff Wahlberg, and follows an Army veteran… Read More 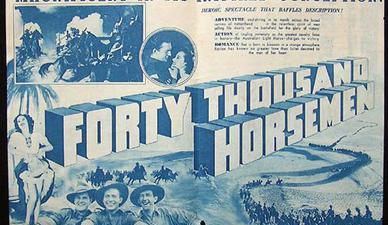 Introduction Forty Thousand Horsemen (also styled 40,000 Horsemen) is a 1940 Australian war film directed by Charles Chauvel. The film tells the story of the Australian Light Horse (mounted rifleman as distinct from cavalry) which operated in the desert at the Sinai and Palestine campaign during World War I. It follows the adventures of three… Read More